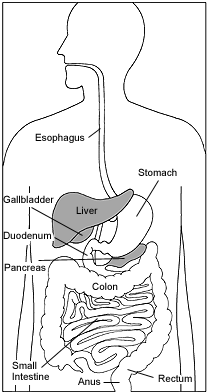 It is believed that the mere presence of gallstones may cause more gallstones to develop. However, other factors that contribute to gallstones have been identified, especially for cholesterol stones.

Obesity. Obesity is a major risk factor for gallstones, especially in women. A large clinical study showed that being even moderately overweight increases one's risk for developing gallstones. The most likely reason is that obesity tends to reduce the amount of bile salts in bile, resulting in more cholesterol. Obesity also decreases gallbladder emptying.
Estrogen. Excess estrogen from pregnancy, hormone replacement therapy, or birth control pills appears to increase cholesterol levels in bile and decrease gallbladder movement, both of which can lead to gallstones.
Ethnicity. Native Americans have a genetic predisposition to secrete high levels of cholesterol in bile. In fact, they have the highest rate of gallstones in the United States. A majority of Native American men have gallstones by age 60. Among the Pima Indians of Arizona, 70 percent of women have gallstones by age 30. Mexican American men and women of all ages also have high rates of gallstones.
Gender. Women between 20 and 60 years of age are twice as likely to develop gallstones as men.
Age. People over age 60 are more likely to develop gallstones than younger people.
Cholesterol-lowering drugs. Drugs that lower cholesterol levels in blood actually increase the amount of cholesterol secreted in bile. This in turn can increase the risk of gallstones.
Diabetes. People with diabetes generally have high levels of fatty acids called triglycerides. These fatty acids increase the risk of gallstones.
Rapid weight loss. As the body metabolizes fat during rapid weight loss, it causes the liver to secrete extra cholesterol into bile, which can cause gallstones.
Fasting. Fasting decreases gallbladder movement, causing the bile to become overconcentrated with cholesterol, which can lead to gallstones. 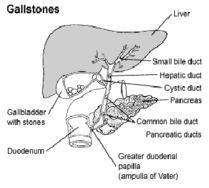 The two types of gallstones are cholesterol stones and pigment stones. Cholesterol stones are usually yellow-green and are made primarily of hardened cholesterol. They account for about 80 percent of gallstones. Pigment stones are small, dark stones made of bilirubin. Gallstones can be as small as a grain of sand or as large as a golf ball. The gallbladder can develop just one large stone, hundreds of tiny stones, or almost any combination.

The gallbladder and the ducts that carry bile and other digestive enzymes from the liver, gallbladder, and pancreas to the small intestine are called the biliary system.

Gallstones can block the normal flow of bile if they lodge in any of the ducts that carry bile from the liver to the small intestine. That includes the hepatic ducts, which carry bile out of the liver; the cystic duct, which takes bile to and from the gallbladder; and the common bile duct, which takes bile from the cystic and hepatic ducts to the small intestine. Bile trapped in these ducts can cause inflammation in the gallbladder, the ducts, or, rarely, the liver. Other ducts open into the common bile duct, including the pancreatic duct, which carries digestive enzymes out of the pancreas. If a gallstone blocks the opening to that duct, digestive enzymes can become trapped in the pancreas and cause an extremely painful inflammation called gallstone pancreatitis.

If any of these ducts remain blocked for a significant period of time, severe--possibly fatal--damage or infections can occur, affecting the gallbladder, liver, or pancreas. Warning signs of a serious problem are fever, jaundice, and persistent pain.

Cholesterol Stones
Scientists believe cholesterol stones form when bile contains too much cholesterol, too much bilirubin, or not enough bile salts, or when the gallbladder does not empty as it should for some other reason.

Pigment Stones
The cause of pigment stones is uncertain. They tend to develop in people who have cirrhosis, biliary tract infections, and hereditary blood disorders such as sickle cell anemia in which too much bilirubin is formed.