In addition, there are other conditions that could cause dysphasia (difficulty swallowing), even though no stricture is present. In that case, various neurological conditions, vascular abnormalities, diverticulums, spastic motility disorders, or skeletal muscle disorders like muscular dystrophy and myasthenia gravis are possibilities. ​

​Malignant conditions may also cause a stricture, or narrowing of the esophagus. There are about 11,000 new cases of cancer of the esophagus diagnosed yearly. This form of cancer is correlated with smoking or excessive alcohol ingestion, particularly in young adulthood. It is more frequent in men than women and also more frequent in African-American people than Caucasians.

Esophageal cancer can develop anywhere along the esophagus but is more frequent in the lower portion.

A condition called Barrett's esophagus may occur in the lower esophagus due to chronic gastroesophageal reflux disease.

What is the treatment for an esophageal stricture?

Treatment of a benign esophageal stricture consists of esophageal dilation. This is most commonly done at the time of an upper endoscopy.  In an upper endoscopy, a video endoscope is placed through the mouth into the esophagus while the patient is under IV sedation. The esophagus is then examined and if a benign stricture is present it can be dilated in various ways.

A balloon dilator passed through the endoscope is often inflated within the confines of the stricture, thus opening the area and relieving the patient's symptoms. Other types of dilators may also be passed although not through the endoscope. These are called Mallony or savory dilators in increasing sizes in order to break open the stricture. In either case, the patients are sedated and should not feel anything during the procedure.

The risks of dilation include potential bleeding, infection or a tear. If a tear is deep enough, on rare occasion, it might require surgical repair.

Treatment of a malignant stricture of the esophagus is available but can often be disappointing. If the malignancy is determined to be small and localized, without any spread beyond the esophagus, then a surgical repair is often opted for and may, on rare occasion cure the cancer. If the tumor is not curable, then often, palliative treatments are employed. These include chemotherapy, radiation therapy, esophageal dilation, laser treatments, injections, tumor probes or placement of an esophageal stent (wire mesh tube) to keep the esophagus open.

In any situation, the patient must work closely with his or her physician to decide what the best approach is for that individual. 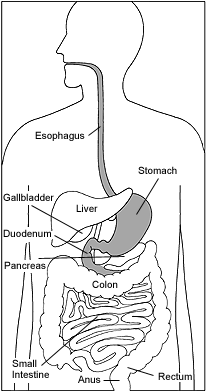 On occasion, a narrowed area will occur in the esophagus, resulting in an interruption in the normal swallowing mechanism. This may result in dysphasia – or difficulty swallowing. Passage of food or liquid may be impaired through the esophagus with a sensation of fullness in the chest, a pressure-like sensation, shortness of breath and inability to swallow food, liquids or saliva. In many cases, this may only last a short time, but on occasion it may be prolonged, requiring emergency intervention.

This narrowing of the esophagus can be caused by many different conditions. The most common is a benign stricture. This is the result of peptic esophagitis or gastroesophageal reflux disease and can occur at any age, though it is more common after the age of 40.

The fundamental abnormality is excessive acid reflux from the stomach up into the esophagus, resulting in an inflammatory reaction in the lower esophagus. This inflammation leads to scarring after repeated injury and healing. Eventually, scar tissue is formed and a benign stricture develops in the form of a concentric ring that narrows the opening of the esophagus. A hiatal hernia is often present in association with the reflux.

This concentric lower esophageal ring sometimes called a Schatzki's ring often occurs at the junction between the esophagus and the stomach and sometimes can be present for years. When diagnosed, it can be easily treated by passage of a dilator through the area to break open the scar tissue and relieve the narrowed area.

Benign esophageal strictures may be congenital, such as a membranous diaphragm – or web – that can occur anywhere in the esophagus, but frequently occurs in the upper portion. This is also treated by dilation, either through an endoscope or by passage of Bougie dilator.