What causes Crohn's disease?
Theories about what causes Crohn’s disease abound, but none has been proven. The most popular theory is that the body's immune system reacts to a virus or a bacterium by causing ongoing inflammation in the intestine.

What are the symptoms?

The most common symptoms of Crohn’s disease are abdominal pain, often in the lower right area, and diarrhea.  Rectal bleeding, weight loss, and fever may also occur. Bleeding may be serious and persistent, leading to anemia. Fever, fatigue, mouth sores, joint and back pain, reduced appetite,weight loss and rash may also be associated with Crohn's Disease. Children with Crohn’s disease may suffer delayed development and stunted growth.

​How is Crohn's disease diagnosed?

A thorough physical exam and a series of tests may be required to diagnose Crohn’s disease.

The doctor may do an upper gastrointestinal (GI) series to look at the small intestine. For this test, the patient drinks barium, a chalky solution that coats the lining of the small intestine, before x-rays are taken. The barium shows up white on x-ray film, revealing inflammation or other abnormalities in the intestine. In addition CT Scan of the abdomen can be a very useful test to look at the structure of the intestines and reveal characteristics of Crohn's Disease.The doctor may also do a colonoscopy. For this test, the doctor inserts an endoscope – a long, flexible, lighted tube linked to a computer and TV monitor – into the anus to see the inside of the large intestine. The doctor will be able to see any inflammation or bleeding. During the exam, the doctor may do a biopsy, which involves taking a sample of tissue from the lining of the intestine to view with a microscope.

If these tests show Crohn’s disease, more x-rays of both the upper and lower digestive tract may be necessary to see how much is affected by the disease.

What are the complications of Crohn's disease?

The most common complication is blockage of the intestine. Blockage occurs because the disease tends to thicken the intestinal wall with swelling and scar tissue, narrowing the passage. Crohn’s disease may also cause sores, or ulcers, that tunnel through the affected area into surrounding tissues such as the bladder, vagina, or skin. The areas around the anus and rectum are often involved. The tunnels, called fistulas, are a common complication and often become infected. Sometimes fistulas can be treated with medicine, but in some cases they may require surgery.

Other complications associated with Crohn’s disease include arthritis, skin problems, inflammation in the eyes or mouth, kidney stones, gallstones, or other diseases of the liver and biliary system. Some of these problems resolve during treatment for disease in the digestive system, but some must be treated separately. Ulcerations in the intestines, mouth, or skin can occur, as well as fistulas or sores in the peri-anal area that might be diffucult to treat. The incidence of colon cancer can increase with Crohn's Disease, particularly in longstanding and difficult to treat Crohn's.

Blood tests can include tests for anemia and inflammatory markers, as well as specific antibodies that can be detected in both Crohn's Disease and Ulcerative Coiltis.

What is the treatment for Crohn's disease?

Treatment for Crohn’s disease depends on the location and severity of disease, complications, and response to previous treatment. The goals of treatment are to control inflammation, correct nutritional deficiencies, and relieve symptoms like abdominal pain, diarrhea, and rectal bleeding. Treatment may include drugs, nutrition supplements, surgery, or a combination of these options. At this time, treatment can help control the disease, but there is no cure. Some people have long periods of remission, sometimes years, when they are free of symptoms. However, the disease usually recurs at various times over a person's lifetime. This changing pattern of the disease means one cannot always tell when a treatment has helped. Predicting when a remission may occur or when symptoms will return is not possible.

Someone with Crohn’s disease may need medical care for a long time, with regular doctor visits to monitor the condition.

Drug Therapy
Most people are first treated with drugs containing mesalamine, a substance that helps control inflammation. Sulfasalazine is the oldest medication in this class of drugs, but it is associated with a high degree of side effects at doses that are necessary for it to be effective. Therefore it is rarely used today. Other newer and more commonly used mesalamine-containing drugs, generally known as 5-ASA agents, such as Asacol, Delzicol, Lialda, Apriso, Pentasa and Dipentum can be quite effective for treating mild to moderate Crohn's Disease and to help maintain it in remission. Possible side effects of mesalamine preparations include nausea, vomiting, heartburn, diarrhea, and headache, though none of these are very common.

Some patients take corticosteroids to control inflammation. These drugs are the most effective for active Crohn’s disease in order to help control the inflammation quickly, but they are not recommended for long term use due to potential side effects, including bone deminerlaiztion, tissue swelling,insomnia, increased facial hair, increasd blood sugar, hypertension and greater susceptibility to infection.

Drugs that suppress the immune system are also used to treat Crohn’s disease. Most commonly prescribed are 6-mercaptopurine and a related drug, azathioprine. Immunosuppressive agents work by blocking the immune reaction that contributes to inflammation. These drugs may cause side effects like nausea, vomiting, and diarrhea and may lower a person's resistance to infection. When patients are treated with a combination of corticosteroids and immunosuppressive drugs, the dose of corticosteriods can eventually be lowered. Some studies suggest that immunosuppressive drugs may enhance the effectiveness of corticosteroids.

Newer infusion or injectable mediactions have been developed that are very effective for Crohn's Disease, and these are called anti-TNF inhibitors or "biologics." They are used for the treatment of moderate to severe Crohn's Disease and to retain remission. The biologics can be very effective for the healing of fistulas and other skin lesions associated with Crohn's. The first medication to be approved in this class is Infliximab (brand name, Remicade) for the treatment of moderate to severe Crohn’s disease that does not respond to standard therapies (mesalamine substances, corticosteroids, immunosuppressive agents) and for the treatment of open, draining fistulas. Infliximab approved specifically for Crohn’s disease, is an anti-tumor necrosis factor (TNF) substance. TNF is a protein produced by the immune system that may cause the inflammation associated with Crohn’s disease. Anti-TNF removes TNF from the bloodstream before it reaches the intestines, thereby preventing inflammation. Since then, other biologics are now availble including adalimumab (Humira), certolizumab (Cimzia), golimumab (Simponi), all of which are effective and self injectable at home. The latest infusion medication, vedolizumab (Entyvio) is a humanized monoclonal antibody and has the advantage of causing less reactions than the earlier anti-TNF infusions. In order for someone to begin treatment with these drugs, underlying Tuberculosis needs to be ruled out, and tests for viral hepatitis need to be excluded. The meds may lower your immune system, and therefore there is an increased risk of certain cancers such as lymphoma and skin cancers.

Antibiotics are used to treat bacterial overgrowth in the small intestine caused by stricture, fistulas, or prior surgery. For this common problem, the doctor may prescribe one or more of the following antibiotics: ampicillin, sulfonamide, cephalosporin, tetracycline, or metronidazole. Diarrhea and crampy abdominal pain are often relieved when the inflammation subsides, but additional medication may also be necessary. Several antidiarrheal agents could be used, including diphenoxylate, loperamide, and codeine. Patients who are dehydrated because of diarrhea will be treated with fluids and electrolytes.

Nutrition Supplementation The doctor may recommend nutritional supplements, especially for children whose growth has been slowed. Special high-calorie liquid formulas are sometimes used for this purpose. A small number of patients may need periods of feeding by vein. This can help patients who need extra nutrition temporarily, those whose intestines need to rest, or those whose intestines cannot absorb enough nutrition from food.

Surgery Surgery to remove part of the intestine can help Crohn’s disease but cannot cure it. The inflammation tends to return next to the area of intestine that has been removed. Many Crohn’s disease patients require surgery, either to relieve symptoms that do not respond to medical therapy or to correct complications such as blockage, perforation, abscess, or bleeding in the intestine.

Some people who have Crohn’s disease in the large intestine need to have their entire colon removed in an operation called colectomy. A small opening is made in the front of the abdominal wall, and the tip of the ileum is brought to the skin's surface. This opening, called a stoma, is where waste exits the body. The stoma is about the size of a quarter and is usually located in the right lower part of the abdomen near the beltline. A pouch is worn over the opening to collect waste, and the patient empties the pouch as needed. The majority of colectomy patients go on to live normal, active lives.

Because Crohn’s disease often recurs after surgery, people considering it should carefully weigh its benefits and risks compared with other treatments. Surgery may not be appropriate for everyone. People faced with this decision should get as much information as possible from doctors, nurses who work with colon surgery patients (enterostomal therapists), and other patients. Patient advocacy organizations can suggest support groups and other information resources. (See For More Information below) for the names of such organizations.)

No special diet has been proven effective for preventing or treating this disease. Some people find their symptoms are made worse by milk, alcohol, hot spices, or fiber. People are encouraged to follow a nutritious diet and avoid any foods that seem to worsen symptoms. But there are no consistent rules. Most importantly, patients should be on a healthful diet and avoid becoming malnourished. When Crohn's is active, or if a ptiet has a scarred and narrowed area of the intestines, then a low residue diet might be recommended, avoiding high fiber foods and raw vegetables.

People should take vitamin supplements only on their doctor's advice. Probiotics are being studied for Crohn's Disease and appear to be beneficial for some patients, tough they haven't been formally approved.

​Is pregnancy safe for women with Crohn's disease?

Researchers continue to look for more effective treatments. Examples of investigational treatments include:

For more information about this topic, visit:

(also known as Ileitis or Enteritis)

Crohn’s disease is an inflammatory bowel disease (IBD) of the small and/or large intestine. Crohn’s disease usually occurs in the lower part of the small intestine, called the ileum, but it can affect any part of the digestive tract, from the mouth to the anus. The inflammation can extend deep into the lining of the affected area and lead to a variety of symptoms including abdominal pain, diarrhea, fatigue, weight loss and malnutrition.

Crohn’s disease is an inflammatory bowel disease (IBD), the general name for diseases that cause inflammation in the intestines. Crohn’s disease can be difficult to diagnose because its symptoms are similar to other intestinal disorders such as irritable bowel syndrome and to another type of IBD called ulcerative colitis. Ulcerative colitis causes inflammation and ulcers in the top layer of the lining of the large intestine.

Crohn’s disease affects men and women equally and seems to run in some families. About 20 percent of people with Crohn’s disease have a blood relative with some form of IBD, most often a brother or sister and sometimes a parent or child.

Crohn’s disease may also be called ileitis or enteritis. 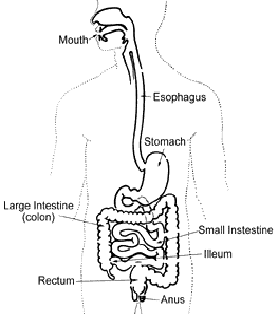